Today we have a couple of photos from Eileen...from when they had the Laurel & Hardy.

What a shame we don’t see crowds like that these days! 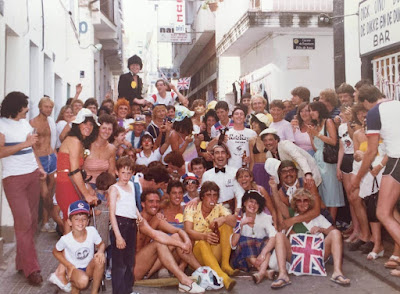 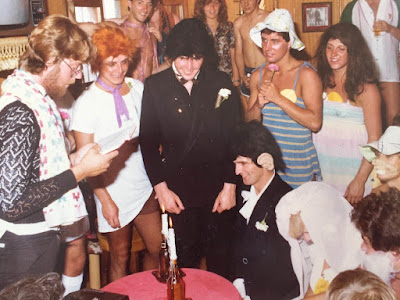 Today we have a couple of photos from Eileen...from when they had the Laurel & Hardy.
What a shame we don’t see crowds like that these days!

Many thanks to Ray for sending us a story from when he was working in Tossa de Mar. Ray has also worked in Lloret and has sent many photos and stories from his time here!

Having arrived in England on the S.S. Iberia on the final day of 1961 I lived in Winchester and formed a friendship with a Spaniard man named Miguel Collell.   I accompanied him to Tossa in May 1962 and he persuaded a bar owner to give me a week’s trial without pay as a barman.   I got the job and worked there until the end of the summer tourist season in early October.   So for about six months I worked as a barman at Chez Biel fronting onto the beach at Tossa owned by Senor Emelio Alberti.   Each evening it became a night club with live music and dancing but during the day people came in from the beach for refreshments.   My working hours seven days per week were 8 a.m. to midnight with a two hour lunch break and a one hour supper break totaling 13 hours per day and 91 hours per week.   The pay was reasonable and I got tips.

We had two incidents that year when a customer refused to leave when told to.   An Italian trying to pick up a girl one the dance floor refused to buy the obligatory one drink so they stopped the music and the guitar player was trying unsuccessful to push the man out the door and down a few steps to Carrer Mar.   I climbed over the bar and went to push the man out the door but while I was doing that a waiter threw an almost empty gin bottle and bounced off my head.   It didn’t interrupted what I was doing but there was some bleeding.    On another occasion the boss was trying to push a man out the same door but the man was hanging onto both doorposts.   I grabbed him behind both knees and heaved upward.   To my horror I saw the man upside down in the air outside the door and just beyond the steps were Carte d’or now exists.    He landed in the gravel unhurt but he did not attempt to come back in.   I am only 166 cm tall and I never would have got away with that stuff in England where men tend to be bigger.

I recently looked up Google Earth street view and saw that big changes had occurred in that area.   The two storey building with large round topped windows on the upper floor is at the corner of Carrer Mar and a promenade line with leafy trees.   A new building on the southern corner now houses  El Congre restaurant.    I see that a small postcard shop named Carte d’or has been built on what used to be a small piece of land where we stored the empty bottles in 1962 and there was a side entrance to Chez Biel that is now blocked by Carte d’or.   When I returned to Tossa in 1963 I was shown a large cellar built beneath the Chez Biel bar and the empty bottles were no longer stored outside.   I lined up a job at Chez Biel in 196 but was persuaded to go and work in a newly opened English pub named the Captains Arms in Lloret de Mar run by Tony Batey and Eric Richards instead.

In 1963 I worked at the newly opened El Rocamar in Tossa through August and September.   The stone building had been built for Londoner Arthur Rubens and his wife and 15 year old daughter whose name I forget.   They had been led to believe that some Spanish ownership was a requirement so they took a man named Julian as their silent partner.   Later on they found that there was not requirement for part Spanish ownership and I think they bought out Julian at the end of 1963.

The stone building had three floors.   In the ground floor there was a bodega and living quarters for Julian’s family.   The next floor contain a dance floor and a bar and there was an open balcony area.   The top floor contained the living quarters for the Rubens family.    Arthur had got workmen to install a stone base with a spotlight lighting up the nearby tower on the fortifications but the town council had made him remove the spotlight.   They had a light  reflecting globe above the dance floor and they used to play a lot of Beatles music.   I was a drink waiter, not a barman.
Posted by Jackie 0 comments 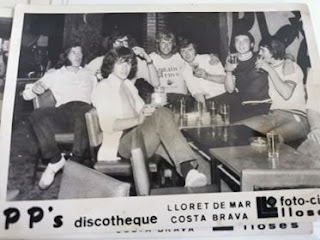 Thanks to Jodie Louise for sending 2 photos through on behalf of her dad Mike Steriker. The pics date back to 1970, Mike worked in the Captains Arms, Wimpy bar and the White Horse...maybe some of you remember him?he is the one holding the ladies foot in the 2nd photo and in the middle of the 1st photo. 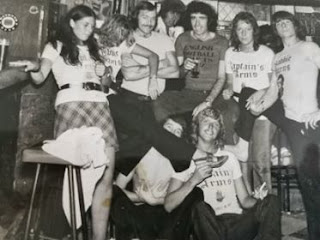 A few more from Robin! 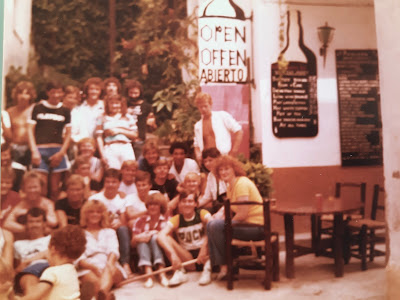 Thanks to Robin who has sent a few more photos for the page, also a bit of info to go with them.....

More photos from the 80/81 era, ranging from mock weddings, Picasso's Pension (if you stayed there, you will remember Arthur and Wendy) Paddy's staff, The Londoner and various other workers. 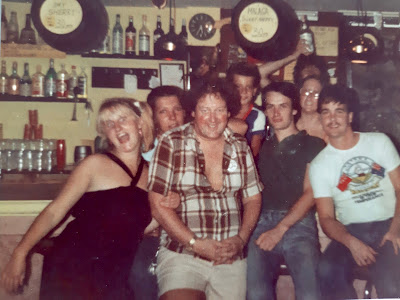 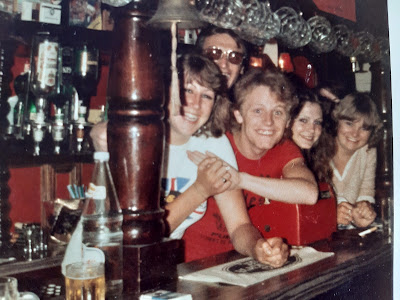 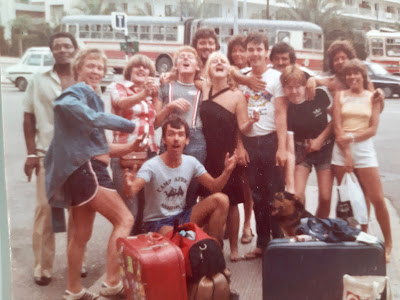 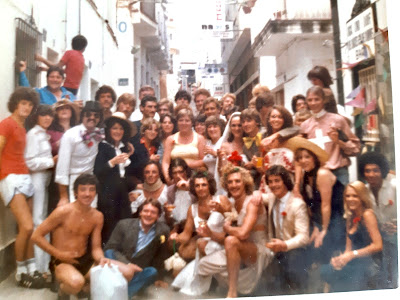 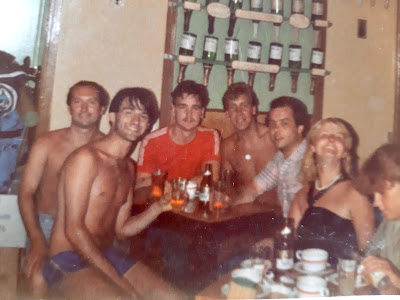 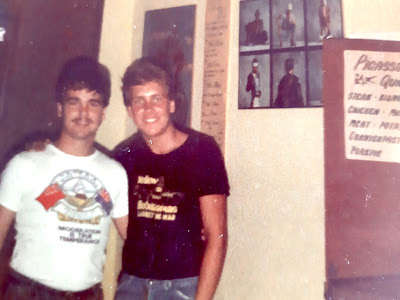 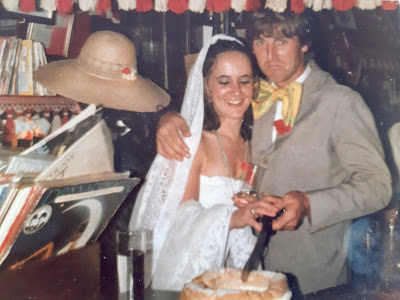 Going back to the early 80s with photos from Robin.

Robin has given some info below...

Just found this Lloret stuff, and thought I'd add some photos. I was working in Paddys Bar in 1980/81. Owned by Raja. Run by Bob and Sonny. Also Happy Days Disco. Still in touch with a couple of guys, but would be interested to hear from others at the time.. 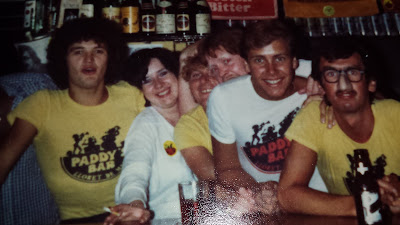 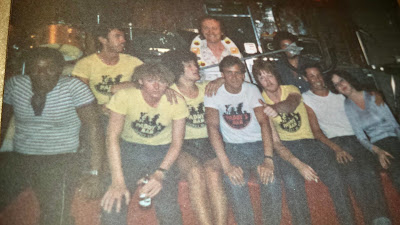 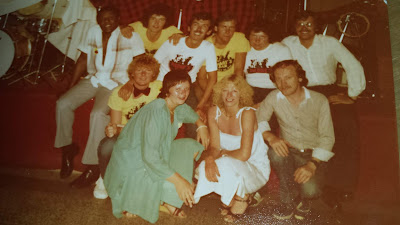 Thanks to Jimmy Harvey for sending me another great set of photos, most I believe are from the Highlander bar. 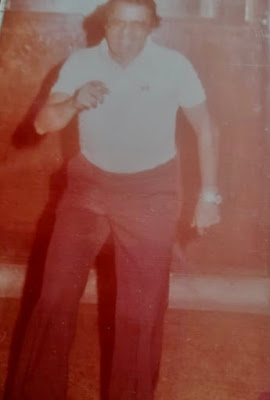 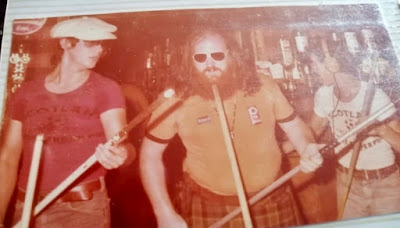 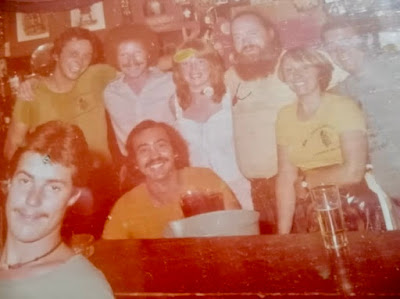 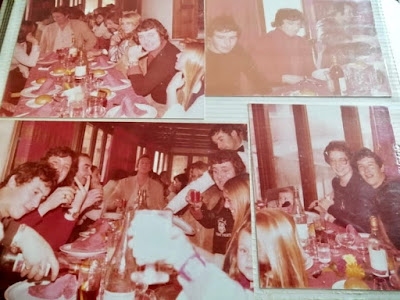 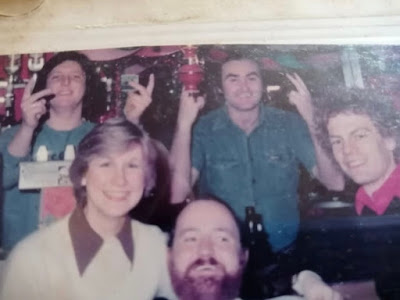 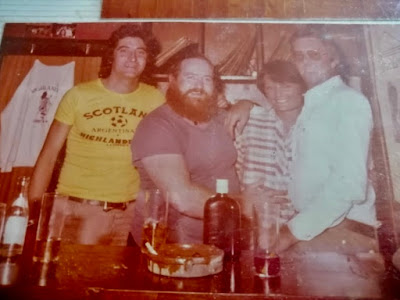 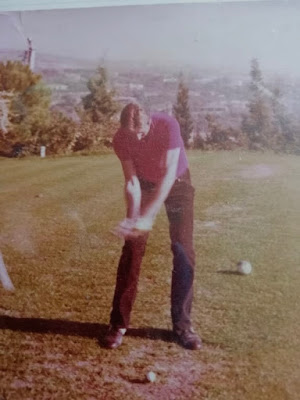 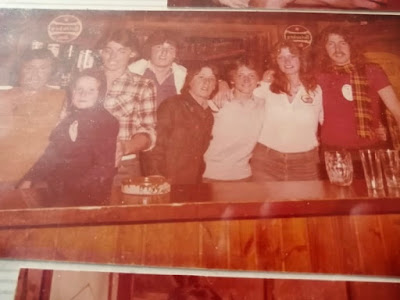 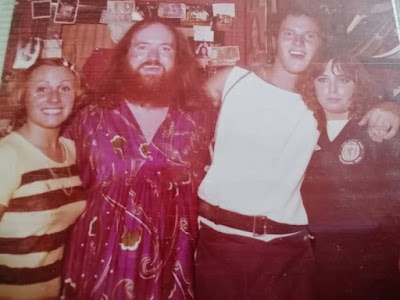 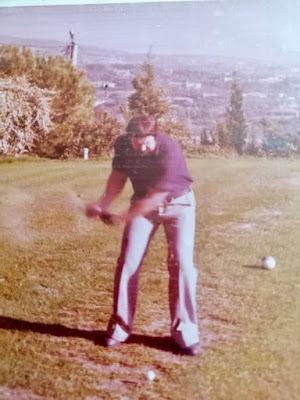 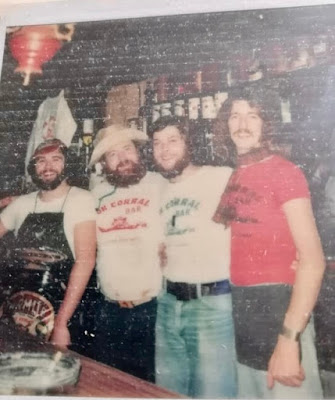 Labels: Highlander
Email ThisBlogThis!Share to TwitterShare to FacebookShare to Pinterest

A photo from Phil

Thanks to Phil who has sent me this photo taken outside Gemini’s.


Taken outside Geminis cafe. Some of the Geminis girls. Paul my brother. Me front row (arms folded) Phil. Ian, one of the lads from home who came to visit. Remember Juliette, back right. Sorry don’t recall the other girls names. Think most of the girls were from Scotland. Remember Juliette lived with some of the others in a little house. Yvonne was one (not in the picture) She might have worked at The Riviera on the front. Happy days, I wonder where everyone ended up? 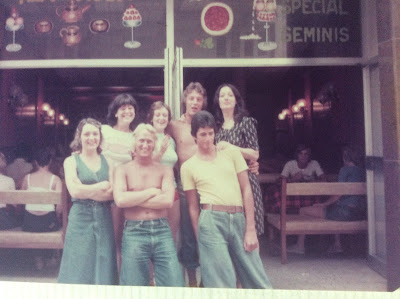